This page contains some excerpts from Working with Stories (pages 85-91) that describe participatory narrative inquiry in a nutshell.

Participatory narrative inquiry (PNI) is an approach in which groups of people participate in gathering and working with raw stories of personal experience in order to make sense of complex situations for better decision making. PNI focuses on the profound consideration of values, beliefs, feelings, and perspectives through the recounting and interpretation of lived experience. Elements of fact, truth, evidence, opinion, argument, and proof may be used as material for sensemaking in PNI, but they are always used from a perspective and to gain perspective. This focus defines, shapes, and limits the approach. 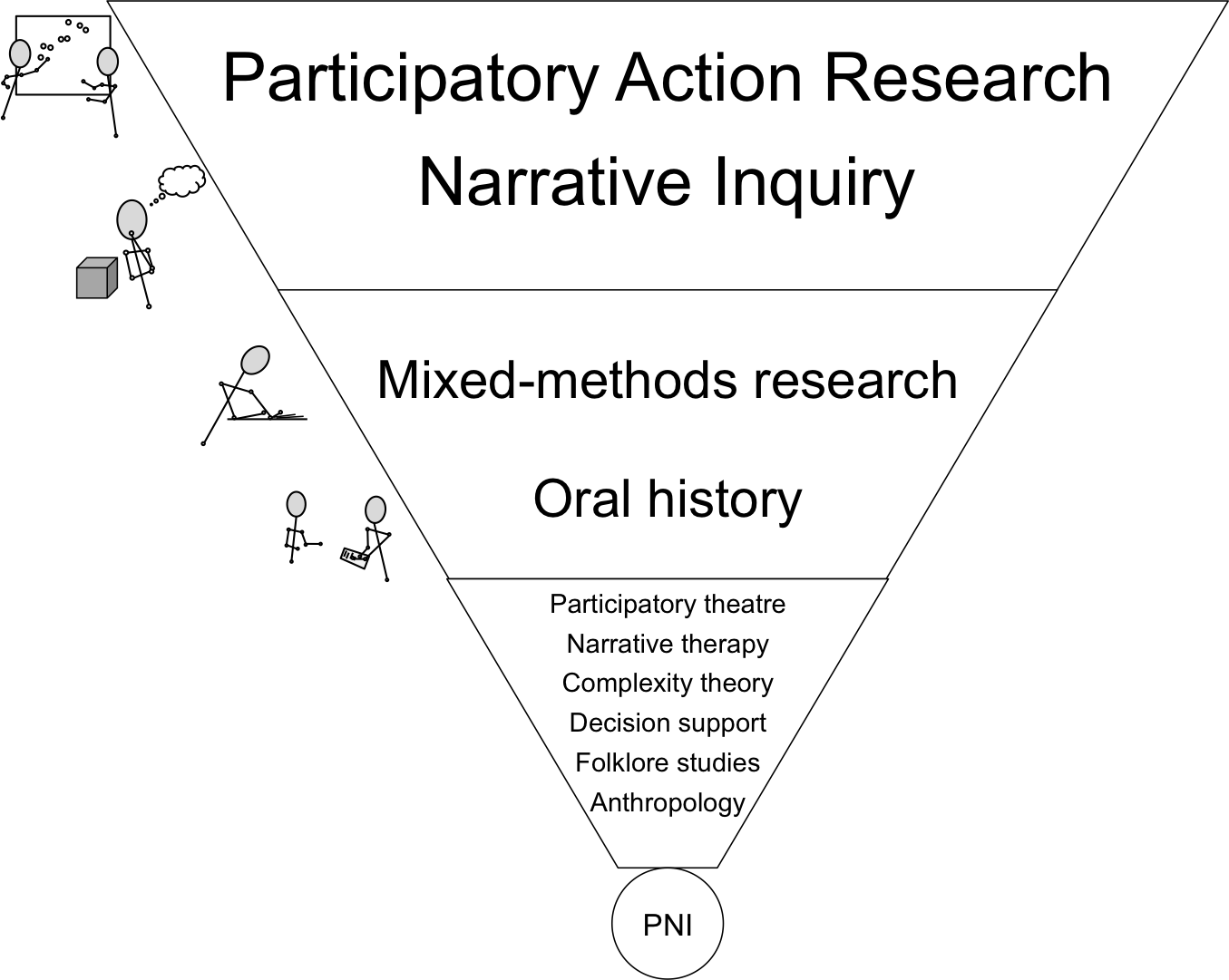 Here is the recipe for building PNI.

Put this all together, stir well, bake, and taste. Repeat many times, and you have participatory narrative inquiry. So PNI is not so much a single idea as it is a way of putting together ideas into a package that works.

The three elements of PNI

The inclusion of each of the words — participatory, narrative, inquiry — in the name has to do with a particular emphasis of the approach, as follows. 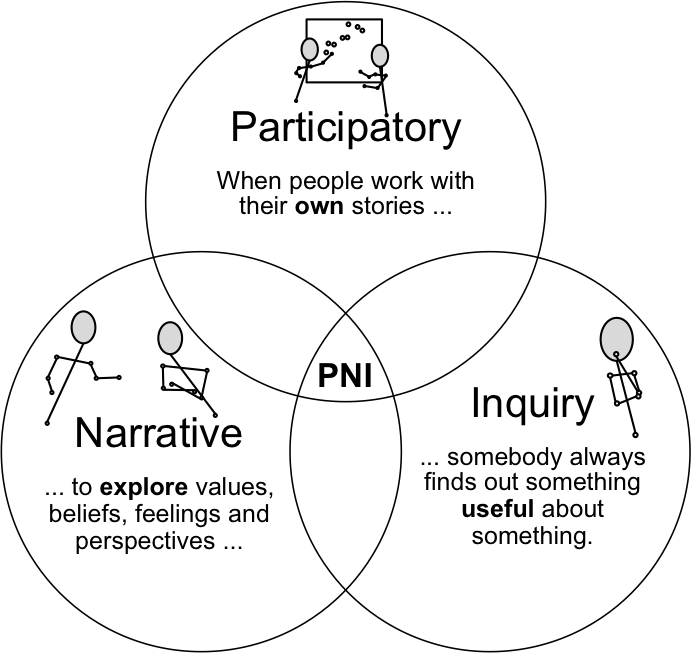 Participatory. Unlike its sibling narrative inquiry, PNI invites its participants to work with their own stories. Participation in PNI can vary in degree from simply answering questions about stories to participating in structured group sensemaking activities where groups of participants ponder issues and problems. But in general, a person who facilitates a PNI project does not tell or interpret or change or even select stories. All of these things are done only by those in the group of interest.

Narrative. The most essential part of PNI is narrative. PNI is founded on the use of raw stories of personal experience. In this respect it differs from other sensemaking and decision-support approaches that sometimes incorporate narrative but do not require it.

Why are stories essential to PNI? Because without them its ability to address its core goals would be reduced. In fact I've seen the approach fail (or at least perform poorly) when most of what was collected was not narrative in nature. When people tell stories, an entirely different set of social dynamics and cognitive processes takes place. When narrative is taken out of the equation, you may have sensemaking and you may have opinion gathering, but the magic of storytelling is lost. The closer you can get to natural story exchange the more powerful the magic is, but even a spoonful of narrative is worth more — for the purposes I describe here — than oceans of opinion.

PNI is not a superior method for all decision support projects, only those for which the profound consideration of values, beliefs, feelings, and perspectives is required. There are many situations in which facts, opinions, arguments, evidence, and proof are of superior utility. For example, if you want to know which of two treatment protocols has a greater effect on the reduction of chronic inflammation, PNI will not give you the result you need. However, if you want to understand the influences of societal taboos and stigmas when supporting patients with various treatment protocols, PNI is likely to give you a more deeply meaningful result than direct questioning.

Inquiry. In every PNI project somebody finds out something about something. They might better understand a conflict, or their own feelings, or the nuances of a topic, or how things got to be the way they are, or how things could improve, or any number of things. But the approach is never just about connecting or teaching or persuading people with stories. Even when a PNI project makes something happen, it happens because somebody found a new way to look at something. Including the inquiry word also makes it clear that the approach is not about telling stories (at least not all by itself). Nor is it about listening simply for the sake of listening. There is always somewhere new to get to, something to achieve. 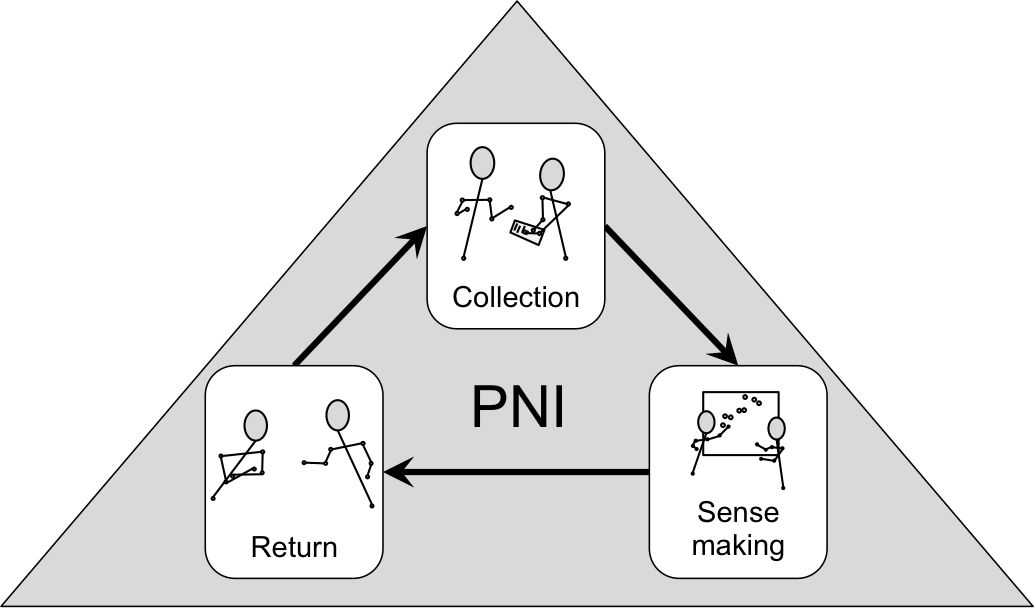 The essential stages of PNI are egalitarian and multivocal in nature. They involve little top-down control, and in each the unique perspective of each participant is heard and included without coercion or artificial consensus. In the ideal PNI project all members of the community join in all essential stages, though in some projects some members may participate more in some stages than others. This is sometimes due to power differences, but not always or completely. Rarely is the entire community able, willing and motivated to participate in every stage of the process. For example, often many people will participate in the collection and return of stories, but fewer will be able or willing to invest the time required to participate in sensemaking. Trust in representation is a critical element when everyone cannot participate — whatever the reason. 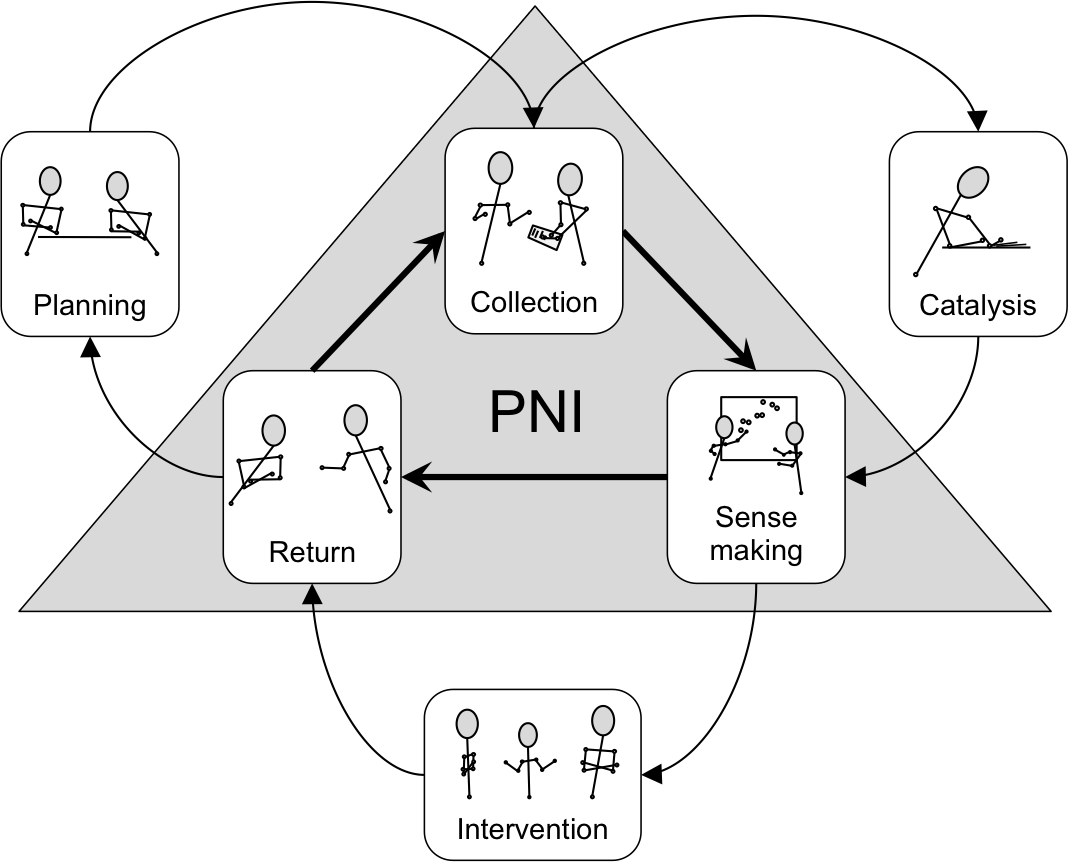 A PNI project can optionally include up to three supporting stages, as follows.

The supporting stages of PNI can be carried out by all community members, but in practice — and much more so than in the essential stages — they are usually carried out by limited numbers of people with the time, patience, motivation, expertise and/or authority to do the concentrated and sometimes difficult work required. However, the supporting stages are not levers that control the project, as anyone who seizes them for that purpose will soon find out. Since the essential phases are participatory and egalitarian in nature, any attempt to constrict or control them through the supporting phases will cause the entire project to fail. Outsiders in particular cannot participate in or control the essential triangle of PNI (without causing some damage) but must maintain a purely supportive role in those areas.

These are some principles that help to define what PNI is and isn’t.

It’s all about decisions. The primary goal of PNI is decision support augmented by sensemaking improved by narrative discourse. PNI does not focus on the goals of investigation, preservation, or communication, though those things do often happen in PNI projects. All of the ideas and methods in PNI focus on helping people make better decisions together, decisions everyone can live with in peace. Why? Because it’s what the world needs most. (That’s what PNI thinks, anyway.)

The play’s the thing. Play takes a central role in PNI, for the very serious reason that play creates the most effective decision support. The telling of stories is a form of play in human life, a partial suspension of the rules of the real which helps people resolve problems. PNI expands on this essential function of stories by incorporating play into every element of its activity, from planning projects to collecting stories to helping people make sense of them. PNI practitioners take on a trickster role in the community or organization they aim to help, to avoid the taint of authority and to increase the benefit of participation. They shift their shapes; they lie; they break the rules; they say what cannot be said; they stand between worlds; but they do all of this play in earnest and with the most constructive purpose. One of the most important elements of learning how to “do PNI” well is learning how to play effectively. (The section of More Work with Stories called “PNI Skills” goes into some depth on the trickster role in PNI.)

People know their stories. There is no better foundation on which to work with stories than stories combined with what their tellers say about them. No outsider to any community can be fully aware of this foundation. Context can upend content, rendering lies as truth and truth as lies, a fact that makes external interpretation not just futile but dangerously misleading. Therefore the more people work with their own stories the stronger any narrative project will be. PNI casts aside expert interpretation as insufficiently beneficial to participatory decision support, and instead gives a central place to the interpretation of stories by people with the closest possible relationships to the stories told.

Don’t mess with the stories. For the goals PNI addresses, true, raw, real stories of personal experience are more useful than stories of fiction. Any attempt to control or change or adapt raw stories will reduce the authenticity and therefore the effectiveness of a PNI project. There is no use helping stories get to where they need to go if they are not the stories that need to be going there. Therefore PNI never alters or “improves” the stories it considers but keeps them in as raw a form as possible, no matter where they are carried and no matter who encounters them.

Don’t boil stories down, and don’t boil them out; boil them up. This principle says that PNI should never be used to pretend to address an issue by collecting stories, then “boiling them down” to boil out emotion or pain or negativity or unwelcome views. PNI takes the stance that progress can be paradoxical: that the best way to create a positive future is to respect and work with all of the community’s or organization’s stories. Many of the methods of PNI help people respect and work equally with all the stories they collect, through ritual, juxtaposition, and play.

Stories nest. A common misconception about PNI is that its purpose is to build one common, merged, single-perspective story agreeable to all, as a kind of consensus building. This is not the focus of PNI. Consensus-building has its merits, and methods that build consensus are worthy of respect and attention and use. But PNI does something different: it works in situations where only partial trust is in place and consensus cannot be reached. Why this focus? Unique among our forms of communication, stories do not force unity but preserve conflict and contrast at all scales. This is why many folk tales have other stories nested within them, sometimes several levels deep. The Arab story-of-stories One Thousand and One Nights is the most famous example of narrative nesting. Likewise, a story project can contain other story projects. It is because a community’s story project can contain—without controlling—the projects of its sub-communities and families that the community may discover valuable insights about its conflicts and agreements.

If you do not make PNI your own, you are not doing PNI. PNI is not a dogmatic set of fixed prescriptions. It is a changing, idiosyncratic, connected, diverse, complex, of-its-time-and-place, living body of work. It is not a star; it is a constellation. It belongs to no one; it belongs to everyone. PNI challenges each of its practitioners and participants to add their unique talents and styles to PNI, to make it grow larger than it was before they got to it.

Note: This part is not in the book (it's from my blog). But it might be useful to people who are thinking about whether the book is right for them.

I chose the name of PNI in part to separate the approach from traditional narrative inquiry, in which stories are collected, examined, interpreted, summarized, and retold by experts — with "informants" doing nothing but having their stories surgically extracted. I do not consider this to be participatory (nor would many adherents of participatory action research, of which PNI is a subset). But I don't know if it is productive to draw lines of distinction between what is participatory enough and what isn't. Purists sometimes destroy what they hope to protect. I'd rather say "more participation is better" and leave it at that.

In my experience, the greater the degree of participation the stronger the positive impact of any project that involves people and aims to improve some situation faced by those people. I have also noticed that some forms of participation are easier to manage than others. So I generally encourage people planning projects to think about taking one more step up the staircase of participation, wherever they find themselves now; but I order the steps so as to make the transition more feasible in practice.